Throughout my career as a youth worker and particularly over the past few years of educating youth workers I have been asked thousands of times what books I recommend youth workers should read. One of the top books I always recommend is The Brain That Changes Itself: Stories of Personal Triumph from the Frontiers of Brain Science by Norman Doidge, MD. It has almost nothing to do with contemporary youth work, however I think that it paints an amazing picture of the plasticity of the brain. This is key to why I recommend it as adolescence is a time where the brain is undergoing an amazing transformation. 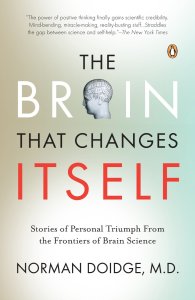 You have to get this book.

Norman Doidge, a Psychiatrist, psychoanalyst  and researcher  delivers a very important and informative book that should be read by all. Dr. Doidge takes us by the hand and carefully explains that the brain can and does change throughout life. Contrary to the previous belief that after childhood the brain begins a long process of decline, Doidge shows us that our brains have the remarkable power to grow, change, overcome disabilities, learn, recover, and alter the very culture that has the potential to deeply affect human nature.

The long-held theory that brain functions were localized and specialised (like a machine) has now evolved to embrace the recognition that the brain is plastic and can actually change itself with exercise and understanding. This is a massive change in our limited understanding of the equipment that helped mankind land on the moon, create cities and solve the worlds diseases… our own brain!

In chapter 1, we meet Cheryl, a woman who has completely lost her sense of balance. She must hold on to the wall to walk, but even that does not steady her. And when she does fall, there is no relief for she still feels like she is falling perpetually into an abyss. This excruciating disorder due to total loss of vestibular apparatus makes her life a living hell. Such people are called “wobblers” because that is what they do. They behave and look like they are walking a tight rope. It is not surprising that many “wobblers” have committed suicide. Enter Paul Bach-y-Rita and his team who have invented a hat. This hat/helmet, with its tongue display and electrodes, acts as a sensor of movement in two planes thus giving Cheryl the ability to orient herself in space, thereby losing the terrible vertigo that led to wobbling. Cheryl and those like her who wear this seemingly magical hat can experience through the tongue connecting to the brain what is needed to maintain balance by finding new pathways in the brain that process balance. The broader implications of this discovery are mind-boggling.

Another hero in the plasticity movement is Michael Merzenich, one of the world’s leading researchers on the subject. Based on his belief in practicing a new skill under the right conditions, he claims that brain exercises can compete with drugs to treat schizophrenia and that cognitive function can improve radically in the elderly. Learning itself increases the capacity to learn by changing the structure of the brain which he likens to a living creature with an appetite needing nourishment and exercise. Working with a monkey he showed how brain maps are dynamic and work by the ‘use it or lose it’ principle. Two phrases associated with Merzenich are ‘use it or lose it’ (as with any muscle) and “neurons that fire together wire together” meaning that throwing a ball, for instance, many times in the same way creates a brain map where the thumb map is next to the index finger map, and then the middle finger. So, brain maps work by spatially grouping together events that happen together. Multi-tasking or divided attention does not lead to lasting change in brain maps.

The story of Mr. L in Chapter 9 illustrates exactly how psychoanalysis changed his character defenses by helping him access his deepest feelings about loss. Mr. L learned that it was safe to give up the denial that protected him for over 40 years from the pain of early loss. He exposed the memories and emotional pain that he had hidden, permitting psychological reorganization. Mr. L changed from an isolated, depressed man unable to commit to anyone, to a man able to experience profound love, marry, and have children.

In chapter 11, “More Than the Sum of Her Parts,” we meet Michelle, born with half a brain. The fact that her right hemisphere took over from her left hemisphere the functions of speech and language, while performing its own functions speaks clearly for neuroplasticity. Michelle leads a comfortable, though somewhat impaired life, enjoys movies, a job, and her family. The story of how one half of her brain took on functions of the missing half is an adventure.

My personal favourite Chapter, Seven, “Pain – The Dark side of Plasticity” introduces us to the neurologist V.S. Ramachandran, described as the Sherlock Holmes of modern neurology. Learning about this man is a fascinating experience in itself. He is heroic in his simplicity and curiosity. “Your own body is a phantom, one that your brain has constructed purely for convenience” says Ramachandran – and this statement has influenced so much of my thinking. His interest became phantom pain – pain that amputees feel after amputation and he discovered that rewired brain maps were the cause. The brain’s plasticity enables rewiring of missing neurons. These discoveries also explain a positive outcome of certain brain remapping and this is in the sexual realm. Phantom orgasm and phantom erection can be experienced in the feet of men with amputated legs and feet leading Ramachandran to wonder about foot fetishes in a neurological way. I will not even try to explain how the mirror box Ramachandran devised to help his patient Philip cope with excruciating pain from an elbow that was amputated works. But, successful amputation of this phantom limb through using the mirror box led others to use it – and there’s more! Ramachandran says that the distorted body images of anorexics and some who go for plastic surgery are caused by the brain and then projected onto the body. So, could one conclude that if one gets the message that he/she is ugly or fat, whether consciously or unconsciously, through loved ones or culture, the brain distorts the perception of the body? Anorectic people actually believe that they are always too fat – defying the reality of scales. It is no coincidence that Ramachandran is from India where his culture was open to what we would call mystical thinking. Psychotic people actually hear voices and hallucinate. Can the theory of brain plasticity be used to explain and even cure such cases. Read this chapter and decide for yourself. The idea that illusion and imagination can conquer chronic pain by restructuring brain maps plastically, without medication, needles, or electricity must be really bad news for the pharmaceutical industry.

The Brain That Changes Itself is one of those books that makes us imagine how much our brains may actually be able to do. Our young people in a state of brain growth have amazing opportunities for their brains to stretch and be pliable. As youth workers this critical time offers us an amazing time to speak into the lives of our young people.

You have to get this book!