Skip to content
We asked our followers recently what they would like us to talk about on the blog and one topic stood out as a major one to start on… Youth Justice. Over the years I have had a number of jobs either in or supporting the youth justice system in Australia. I must confess I struggled working in the sector. Not because the young people are difficult (in fact they were some of the most responsive young people I have ever worked with), but because of the community perception and the subsequent policy directives. The young people I worked with often lacked direction, struggled with education and were wary of anyone who showed concern for their welfare. The community saw liars, thieves and violent offenders who should be hauled over the coals.
It is hard to ignore the crimes that some of  these young people have committed, and you know what we shouldn’t!!! These young people have been detained because of what they have done and will pay for their crime. However there are a couple of ways that this can happen depending on your point of view. Is detention there for retribution or restoration??? The young people did the crime and they should do the time. We believe that JUSTICE requires it. However, the question we should ask is what happens to them between the first day behind bars and their last day to develop them so that they do not continue back through the revolving door?
In the adult prison system, here in Victoria, there is over 50% likelihood that an offender who is jailed will return to prison within two years of release. A child of a prisoner is SIX times more likely to become an offender than their peers. A young person who is incarcerated will rarely complete secondary education. WHY???  The best answer we can come up with is that the system is a system that is geared toward retribution. We individualise the dimensions of the crime and remove the ideas of social justice from the rights of an offender and then ask them to change. We strip them of their humanity and then ask them to be humane. Crazy!!!
In many youth justice systems and support agencies here in Australia there has been a push towards more restorative practices. This has been met by mixed responses from the community. Governments are still stuck in limbo between retribution and restoration. To provide a measure of punishment for their crime, but to also provide opportunities to develop skills for post-release. The rise in victim-offender mediation and group conferencing has been amazing and the opportunities through NGO’s such as Whitelion and Jesuit Social Services to name a couple, for young people to gain employment and social skills has definitely changed the landscape.
But what does it all mean for us as youth workers??? Many writers have said that a core tenet of youth work is social justice. I ask whether we are being social just to the young people we incarcerate??? Earlier this year I spent some time in Tasmania visiting Port Arthur (if you ever get the chance you simply have to go). Port Arthur was one of the original penal colonies when the British began transporting convicts to Australia. In particular I was fascinated by Point Puer the first ever boys prison in the British empire. The punishments were severe and boys as young as nine were incarcerated there, however they also taught the boys some skills. Some became so skilled they were employed straight from detention to the detriment of other qualified tradesmen who hadn’t been incarcerated. Can you imagine if our incarcerated young people were taught trades in the same way??? Being taught excellence in your handy work. Being so highly sought after that you could walk out of detention and straight into a well paying job??? 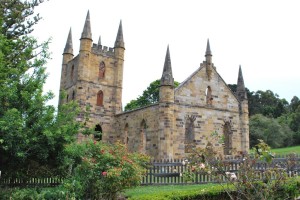 (A sample of the young boys handy work… It could hold over 1000 people.)

﻿
As a youth worker it is our responsibility to advocate for our young people. The current system still lets our young people down. We still have those who believe in retribution in positions of power in the youth justice system and we still have young people following in their adult counterparts footsteps… Dancing through the revolving door. There will always be crime as long as people are on the earth. How we deal with the crime is what is in question.
We believe in RESTORATION here at Ultimate Youth Worker. This does not mean being soft on crime, on the contrary. It does mean providing every opportunity for the young person to make something of themselves. To throw off the social, economic and cultural ties that bind them. To make amends and for them to be given the opportunity to live as free men and women. We believe that the best way to deal with crime is to deal with the social issues which lead to crime. We believe that the best way to deal with offenders is to develop them as whole people! To do this we need to address all the failings of society which led to their incarceration… and restore them to their community. Reflect on this:

“Youth workers are facilitators of restoration not social controllers.”

If you take on the challenge to provide a restorative environment for young offenders then you may find yourself having to become a canny outlaw. It is hard to fight for whats right in the face of the easy way of following the rules. Our young people need you to speak for them. They need your actions and support. They need you to be practically wise. They need restoration.

For more info on restorative justice see Howard Zehr below.

What are your thoughts???